"No cuddling the animals, especially not the orphaned babies.."

That was the first and most important instruction we received from Anna, our volunteer coordinator and chief Jaguar-tamer, upon entering ARCAS – Guatemala's most successful wildlife rehabilitation center. Located on the edge of the Mayan Biosphere Reserve, the second largest remaining tropical rainforest in the Americas, ARCAS Peten is one of two rehabilitation centers for indigenous wildlife, whose purpose is to rehabilitate and protectively release animals back into their natural habitat.

Unlike many animal rescue centers around the world, that for the sake of raising funds and garnering attention often put their patrons' and volunteers' needs before the needs of the animals, ARCAS maintains a very strict policy on handling and caring for the animals. There is no room for overly demonstrative affection toward the wildlife in the process of rehabilitation. Quite the contrary, they follow the belief that a wild animal that becomes familiar and easily drawn to humans is likely to put itself at risk of being captured, traded and illegally hunted. 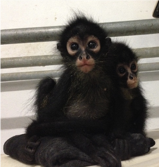 Seriously though, who can resist cuddling a little orphaned spider monkey or playing around in the pond with a silly otter..? It's not always easy, but when you remind yourself that "it's not about you, it's about the animals", there simply is no greater feeling of satisfaction than knowing that your time as a volunteer directly contributed to the animals' safe and healthy release back into the wild.

Since 1989, ARCAS has been working with the Guatemalan government to combat illegal hunting, pet trade, as well as to educate younger generations on the horrendous consequences of these practices. The staff and volunteers' rigorous and often heart-rendering work has made it possible to reintroduce thousands of animals back to their natural homes. But instead of going on and on about all the incredible programs and work that ARCAS does day-in-and-day-out, I'd like to tell you about the actual experience from the eyes of a volunteer. That isn't to say, don’t read up on it – not at all! – I encourage you to follow their work online and get involved - check out their website and other social media outlets. Heck, start planning your next vacation to the Peten region of Guatemala and make sure to visit them and volunteer if you've got the time. I'll even go so far as to suggest other fun activities for you to do while in Guatemala, just send me an email titled "ideas for Guatemala..".

In December of 2013, I packed my rucksack for the umpteenth time, gave my hubby-to-be and our crazy dog a big kiss, and headed across the globe to Mexico to immerse myself in a two-and-a-half month Central-American backpacking trip. My traveling friends all sent in their lists of "great destinations to visit" in Mexico and Guatemala, many of which I incorporated in my travels, but none of which included the one element I was desperately looking for – an experience of some sort working with animals.

As a huge animal-lover, I've always wanted to dedicate a portion of my time to working with or assisting animals who have, in one way or another, been negatively affected by the advancement of humanity. It's the one area of my life that hasn't yet been fulfilled properly. And finally, I had the opportunity to put my money (literally) where my mouth was. So, while backpacking through Mexico, I put my "google fingers" to work and began an online research for the perfect place to volunteer with animals in central America. 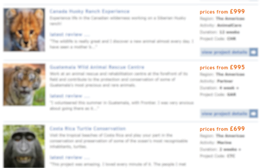 Most search results brought about services that charged hundreds of dollars per day to freely volunteer at animal centers of different sorts. Some centers offered full transportation services, lots of fun extracurricular activities for volunteers and of course lots of one-one-one time with the animals. But this all seemed counter-intuitive. I wasn't looking for a pampered experience or a summer camp excursion with drunken 21-year-olds. I was happy to leave that treasure trove of experiences to some of my younger and less adventurous contemporaries who were keen on spending their college years upside down over beer kegs. And just to clarify, most voluntary organizations must charge "live-in" volunteers a nominal amount of money simply to sustain their accommodations – food and shelter doesn't come free to a not-for-profit organization. So, understandably I'd have to pay to volunteer and was happy to do so.

In a small internet café in Mexico, google-fingers came across the ARCAS website. The mission seemed in line with my beliefs, the center was accessible and the team's response to my inquiry was fast and courteous. They clearly understood this type of volunteer's state-of-mind and thoughtfully wove it into their daily routine without compromising their purpose and needs. My kind of organization indeed, now it was simply a matter of coordinating with the staff and getting there.

In an attempt to stick to the pre-allotted budget, my journey from San Cristobal (Mexico) to Flores (Guatemala) was one used by the locals and more adventurous travelers. There were no luxury buses to take me from point A to point B. Instead, a series of tightly-crammed vans zipping along narrow winding roads, a wooden dinghy that took me across the border between Mexico and Guatemala and an old chicken bus trying to survive yet another unpaved road, whose driver seemed to be in no rush to get to his destination. After what seemed like 36 hours of hell for my dear derrièr, we finally arrived at the colorful island of Flores for a night of deep sleep on the cheapest hostel bed I could find. That night was to be my last before embarking on a month-long journey with my global companions at ARCAS Peten, where 5:00am wakeup calls, long hours of physical labor, and priceless experiences were all the norm. I couldn’t' wait to begin the REAL journey…

To learn more about ARCAS:

Have questions or need some tips related to this topic? Contact me at tal@shongolulu.com